This stamp is in fact a forgery of a 1937 British Definitive Stamp produced by the Gestapo. It contains small changes designed to make a political statement about the British decision to wage war on Germany. These include the Jewish and Soviet symbols noted. Some of these forgeries were overprinted “Liquidation of Empire Trinidad” which was meant to convey a secondary message about the British decision to grant bases in Trinidad to the US. Six different values are know to be overprinted with this message. 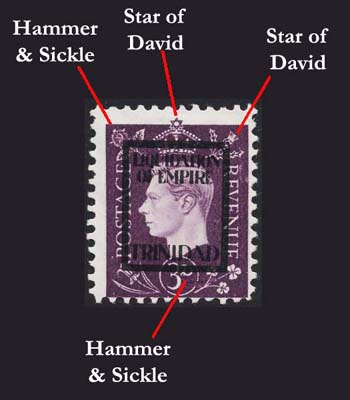