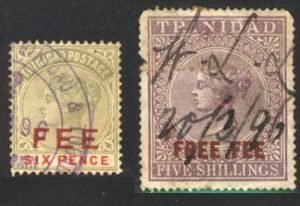 Revenue stamps are used by governments to collect taxes (for fiscal purposes). For example they are used on deeds or receipts to show payment of the appropriate taxes. Often ordinary postage stamps were used, but to help with accounting sometimes stamps were overprinted to specify the purpose. The two stamps above are examples of this.

These are examples of ordinary stamps used for fiscal purposes. Many early high value stamps were commonly used as revenue stamps. These stamps were rarely used to pay postage so postally used copies are much rarer and so more expensive, (the catalogue values are for postally used examples). Buyer beware! The first stamp shows an attempt to turn a used revenue into a postally used stamp by applying a genuine cancel over the top of the pen cancellation. The second stamp looks like a genuine postally used stamp but in fact has a Registrar General cancel. The third stamp was also used fiscally. 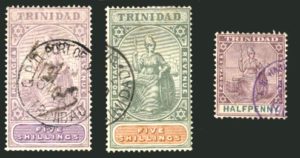 This stamp was never issued for postal use, even though it is similar to stamps of the 1935 Definitive series. Note it is marked REVENUE. 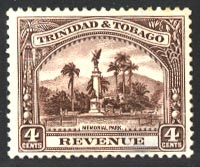