The plates that were used to print stamps were very durable and were used for many years. Thus the Queen Victoria plates used to print Tobago’s stamps saw extensive use and 1892 part of the plate was damaged. This left stamps from Row 1 Column 4 with a gash above the E of POSTAGE. A repair was attempted in 1896 which removed the mark but left an incomplete edge.

Thus every sheet of 60 stamps printed in the period had one “Slash Flaw” variety on it. This makes it somewhat rare. 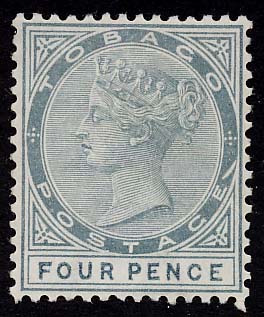