War Tax stamps were issued in the First World War. They were made by overprinting regular 1/2d and 1d issues, this was done locally.

Some errors occurred in the printing process such as inverted overprints and double overprints. As they were heavily collected at the time and these errors were rare, there was an incentive for forgers to make “rare and unlisted” errors. And they obliged.

The 3 stamps shown above are examples of obvious forgeries. With the first 2 the forgers followed their imaginations producing “double errors”, double overprint with an inverted A, and double overprint at 45 degrees. 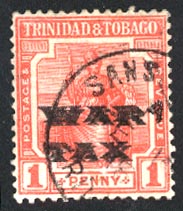 This final stamp is a much harder forgery to detect as the forger has taken the time to get a valid used example of the War Tax stamp, (San Souci FE 16 1918). The overprint was lightened and a second forged overprint applied over the top!