The above item is not a postage stamp but rather a charity label. These were sold to raise money for the Tuberculosis Sanitorium Fund in 1935, the “Royal Jubilee” refers to the Silver Jubilee of King George V in 1935. These were locally prepared and sold for 2c each, this was organized by the Trinidad Guardian (the leading local newspaper). Often these labels were applied to letters as a decorative feature, and as a means of raising awareness. 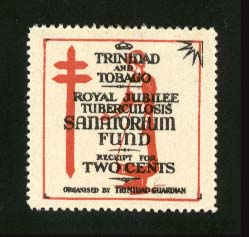 Tuberculosis is one of the oldest diseases and was known as consumption or the great white plague. It was one of the leading causes of death until anti-tuberculous drugs were introduced in the 1940s. Since then it has slipped down the list of leading killers and off the public’s radar. But it is making a strong come back with new drug resistant strains surfacing, notably in the prison populations of Russia.

The international symbol of the global fight against tuberculosis is the doubled barred cross of Lorraine. Similar crosses are reputed to have been used in 800AD by Christian sects in the Orient. But it was the Crusades and Godefroy de Boullion in particular, (Duke of Lorraine), that made it a popular symbol. He flew this cross in his standard when he took part in the capture of Jerusalem in 1099 during the first crusade and later this kind of cross was attributed to him and his successors. Later the Patriarch of Jerusalem granted the Knights Templar the right to wear the double barred Cross of Lorraine as their insignia. 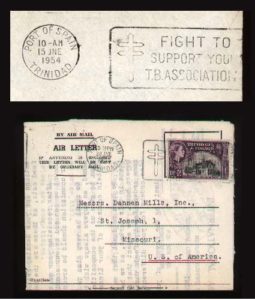 It was perhaps this association with the crusades that led to its adoption in 1902 as a symbol for the “crusade” against tuberculosis.