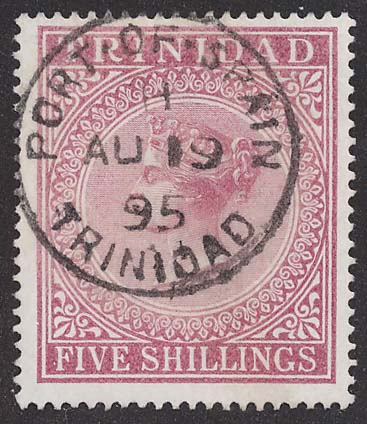 Postally used high value stamps are rare, often more so than the mint ones. By postally used I mean stamps that were used on regular mail and travelled through the postal system. Given this, it is common to see high values stamps in less valuable states offered as genuine postally used stamps. These include;
Fiscally used (from legal documents).
Fiscally used with the pen marks removed and a forged or real cancel applied.
Cancelled to order (CTO), usually done as a favour for a stamp collector. These are often done long after the stamps have been out of normal circulation. E.g. a stamp issued in 1890 with a 1920 cancel.
With forged postmarks. Often done to “rescue” a mint stamp with damaged gum.

In light of this the above stamp presents a dilemma. On one hand it has a very nice postal cancel with a date that is in keeping with normal usage. However, the ink seems to be water based and not oil based like most inks. It is worth noting that water based inks are often used by forgers to “paint” a cancel. More worryingly, records show that this cancel was sent in to Trinidad on December 4th 1895. If this is so, how is it cancelling stamps in August 1895?

This may appear to be conclusive evidence that the cancel is dubious, but postal clerks did frequently use water to “stretch” their ink. Also some times dates were incorrectly set by the same postal clerk. In this case I came across a postal card with the same cancel dated September 11th 1895, again before it was sent to Trinidad. Clearly there was an error in setting the year as all other cancels are from 1896 and the writer has included a 1896 date. From this it seems reasonable to infer that this cancel had the wrong year set for a part of 1896 when this 5 shilling stamp was cancelled. Hence the cancel is genuine. 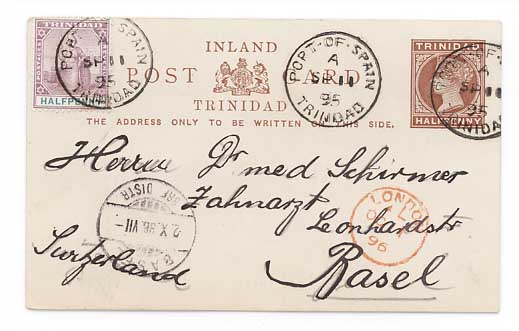 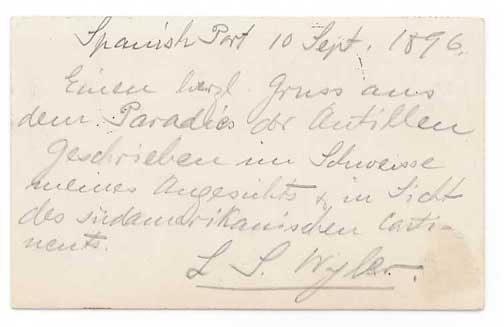