1/ Philately, to many, is just a fancy name for stamp collecting. Stamp collecting is however only one part of Philately. A better description of Philately may be the study or collection of any area related to the postal system. The story of how the name Philately arose has been repeated many times, usually in the first paragraph, so here goes.

“Phil” is a prefix that connotes attraction or love, hence a philosopher is a “lover of truth” and an Anglophile is a “lover of all things English”. Up until the introduction of postage stamps mail was sent postage free with the cost to be paid by the person to whom the mail was addressed. It was a sort of Cash On Delivery system which in today’s terms may seem unfair. In the 19th Century this was equated with being taxed for the delivery of mail, but the introduction of stamps and fixed rates allowed mail to be paid for by the sender. Thus the French coined the term Philately, i.e. “love of being tax-free”, for those early stamp collectors.

2/ Starting a Collection. For those who are thinking about starting stamp collecting there are many avenues to take. Here are a few pointers; Most start by collecting stamps from the whole world. This can be rewarding, especially for the young, soaking stamps off your relatives’ mail and pestering friends for their old letters. By collecting stamps in this way you can get a sense of being connected with the outside world. However, from a collecting point of view this is a daunting task and it is virtually impossible to complete to any degree, unless you have a billion or two lying around in a bank account.

To make the goal more attainable what some people try to do is get a stamp from each country, including the so-called dead countries, (those which have changed their names or were absorbed by others). Similar to this, some try to get a copy of the first stamp issued by every country. But this can get expensive as the first stamp of many countries (such as Trinidad’s Lady McLeod) are very expensive.

3/ Developing a Collection. If you collect for a long period of time you usually start to focus on some particular area. Popular ones include;
Collecting from one country or one geographical area (e.g. the Caribbean or North America).
Political groupings such as the British Commonwealth or French Colonies.
Time Periods, for example stamps issued by British Commonwealth nations in the Reign of King George VI.
Thematics; this tends to focus on the designs featured on stamps. Popular ones include Birds, Animals, Scouts, and United Nations. The object here is to collect stamps with these themes regardless of country.

4/ A Few Thoughts. Before you launch into collecting its always good to pause and make a few decisions which will help if you decide later to collect seriously. A few points to think about ;
Mint or used? Usually people decide on one or the other but some mix them. If you live in the tropics remember that mint stamps present problems. Firstly there is a fungus (called rust) which grows on the gum and it likes hot moist conditions! Secondly in the tropics gum oxidizes and turns brown with age, this can make your stamps increasingly unattractive and worthless (in terms of resale that is). I personally prefer used stamps because they require more effort in the way of collecting. Mint stamps are usually sold by the set and dealers stock them in depth, whereas used stamps are usually sold individually and are hard to come by with clean cancels. 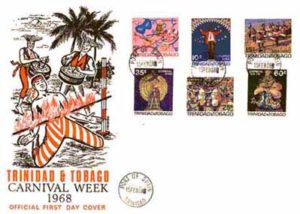 Miniature Sheets (MS) are also something designed for the collector market. It is usually a full set of stamps from a series printed together on a small sheet, but recently they have been special stamps not ordinarily released for postal use (see right). It should be noted that all stamps are not released as miniature sheets.

5/ Becoming a “Serious Collector”. There are other areas which collectors delve into, for example die proofs (these are tests made by the printers when designing and perfecting a particular stamp). One broad area of interest is postal history. This includes topics such as town cancels, slogan cancels, ship cancels (Paquebot), military mail, censored mail, etc.

6/ Catalogues. These are important tools for any collector but they are often misunderstood. Most catalogues list the stamps issued by a country in chronological order and give prices for mint and used copies. But they often differ heavily both in price and what they consider to be worth listing. For example, sometimes the same stamp may be printed many times over a period of years and at every printing the inks used may vary in colour. This will lead to noticeable differences (shades) which a catalogue may take note of and price according to rarity. Besides colour there are also differing paper types, watermarks, etc.

By the way catalogues are expensive and come in volumed sets (about 7 in many cases). If you are collecting just Trinidad and Tobago stamps then it may be best to pay a library a visit and photocopy the relevant section!

For those collecting Trinidad and Tobago there are two catalogues which most people use Scott’s and Stanley Gibbons (but there are other’s e.g. Minkus). Below I’ve summarized the main differences.

Scott’s; This is the catalogue of preference in the United States and Canada. Its prices represent what the publishers feel is the market value for a particular stamp in the North American market. Generally dealers price at a percentage of Scott, usually 50% to 100%, but sometimes lower. It covers most of the basic issues but is a bit lacking in detail when it comes to varieties and shades of the same issue. Also many of its prices seem out of step the real rarity of some stamps. Hence most U.S. specialist collectors and dealers use Gibbons as a reference.

Stanley Gibbons; This catalogue is published by a retail stamp shop on the Strand, London, England. Its prices are supposed to represent how much they charge for a particular stamp. Thus it’s supposed to be equivalent of a huge mail order catalogue (running into many volumes) but if you’ve ever looked through their stock it definitively isn’t. This aside it is the most thorough catalogue for Great Britain and the Commonwealth that is commonly available and it is the general reference for most collectors of Trinidad and Tobago. When it comes to their prices however dealers usually discount in the range 30% to 75% of Gibbons.