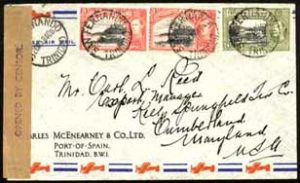 During wars all means of communication become a matter of concern for the authorities. The reasons are obvious; to prevent spies operating, to prevent information being passed knowingly or unknowingly to your enemies, to gather information on the activities of your enemies etc..

During both World Wars Trinidad and Tobago was a British Colony and thus its mail was subject to censorship by the Colonial Authorities. Basically the authorities had the power to open any piece of mail and inspect the contents, if needed they could delete sections, delay or hold it. In most cases suspicious mail was opened and the contents checked. It was then resealed with a label and often at various points in the process different handstamps were applied.In World War II censorship was extended to foreign mail in transit by both air and sea. Trinidad’s position on the South America airmail route as well as its geographic location meant it became a regional center for censoring mail to/from South America.

Below the front and back of a wartime cover from Switzerland to Trinidad are shown. This was censored by the Nazi Authorities (label on back) before being routed through Portugal. On arrival in Trinidad it was opened and reseal
ed with a label on the right. 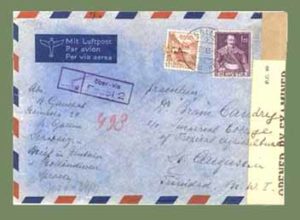 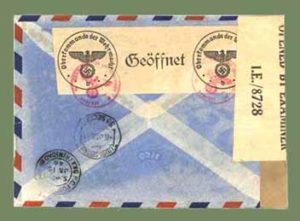 Additionally, during World War II the United States was granted permission to set up bases on Trinidad. As a result they set up post offices for their troops to use. These were separate from the local post office system and for all intents and purposes were considered a part of the US mainland. Thus US stamps were used and rates were discounted. Each site was given an APO number (Army Post Office) to conceal its location. There are eight numbers associated with Trinidad;
0667, 0687, 0688, 0695, 0803, 0868, 0869, 0880.