One area that is popular with collectors is Maritime Mail. This is a reminder of the golden age of shipping (19th and early 20th century), before the advent of air-mail, when most mail was carried by ships. Overseas mail was generally carried by mail or packet boats which plied regular routes. Some ships were run by the colonial government but others were private.

A good point to start when looking at the history of this subject is the 1660 Act of Parliament (in England) that required all mail carried by merchant ships or war vessels to be handed over to the nearest post office for delivery and forwarding once the ship had docked. A penny per letter was paid to the captain so as to encourage compliance. These letters were stamped “Ship Letter”. Later the same system was extended by international agreements and as French is the world’s official postal language it became known as Paquebot (French for Packet Boat). The cover shown has a Grenada stamp and was posted in Port of Spain and is addressed to England. 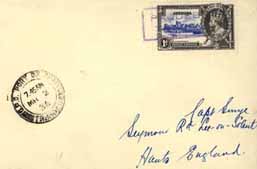 With the decline of merchant shipping today this system may seem an little more than an historical oddity. For example if a passenger on a US ship writes a letter to England and the ship calls into Port of Spain, they can apply a US stamp to the mail and hand it over to the post office for carriage to England! The letter will be stamped “Paquebot, Trinidad” even though it has US stamps on it. All this begs the question; ” Why not just use Trinidad stamps and put it in a mail box”. As far as I know the system is little used today and as you may suspect most of the modern covers with “Paquebot” markings are “Philatelically Inspired”, i.e. produced by stamp collectors.

Also it should be mentioned that in the 19th and early 20th Century local mail was also carried by boat as much of Trinidad was inaccessible by road. Coastal steamers circled the island on regular routes  e and they had their own date stamps. The one shown here is from the S. S. St. Patrick, a steamer which ran between Port of Spain and Carenage, Five Islands and Monos in the period 1917-21.